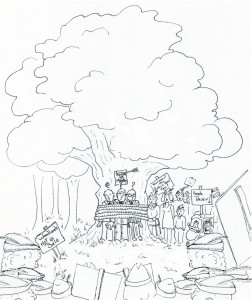 I am feeling, like many angry, beleaguered and frustrated by the constant stream of dire information on just how this country is being run into the ground. The illogical decision, in the face of all the evidence, to promote Fracking on this tiny island, trying to tell us that it is safe and finically viable, when people in countries with this stuff happening are suffering gas coming out of their taps, whole towns being shut down due to the water sources being utterly dried up, because to run one drill, in one day, takes more water than the whole town uses and they have thirty drills! Even the financial incentives are falsified and ridiculous as one financier in an open letter to the Financial Times newspaper, pointed out.

The out right arrogance and temerity of attempting to rescinding much of the Freedom of Information act and the Human Rights act, telling people that the idea of a minimum wage was affecting the growth potential and Britain’s financial recovery! The intention to cull Badgers, in spite of the experts saying it was the wrong decision and could make things worse, Eric Pickles setting a president to allow quarrying in Ancient woodland……shall I go on and on and on?

I have seriously considered running for local government as there seems to be no one in power who actually seems to give a flying **** about really changing the desperate status quo. Even the Green party have denounced their own man in Brighton, for bringing the party into a bad light with his high handed and ill judged ways of dealing with things.

To be truthful I don’t have the capacity of strength or will to run for local office and deal with the incompetent jobs-worth dinosaurs, “here is my hat and clip board which entitles me to say No, you can not do that perfectly sensible thing, because I have the power of a petty tyrant and enjoy making your life difficult, and because its in the rules that I can,” that inhabit the halls of power, but if I were a younger woman, maybe……

I have always been reasonably politically and ecologically aware and the injustices of this modern life have always torn me emotionally, I do what I can to make my bit of the world better, but like many of us, if I am honest, not as much as I could.
There are facts of existence in the modern world that mean there are compromises and pay offs that you choose to make in order to keep a relatively clean conscience.

I choose to be aware, to try to educated people with gentle information and by example where ever I can. When working in “mundania” I have had many deep conversations with people who have changed ways of thinking when provided with more balanced and comprehensive views of what ever”Newspaper Headline” information happened to be prominent at the time. I am happy that in small ways I have had some positive affect, but the larger picture still worries me.

I wrote to my MP (a tory) when they first got into power and were wanting to sell off all the publicly owned woodlands, which they have been doing by stealth ever since the noise died down, and I said that they were making the same mistakes that the last conservative government did. He told me that I was living in the past and that I could not visit those mistake on this new government! Well he is going to get another letter shortly, I will try to be polite, it will however state that in my opinion, his government have done even more to ruin and reduce the state of this country than the last conservative one did. In short they have sort to return the country to the Victorian ethos of one rule for business and one for the rest of us, i.e money rules, at any cost, that they have learned nothing and care nothing for basic human, animal, vegetable or mineral rights if is cost or can make pounds, shillings and pence.

Their policies are unsustainable, they are sweeping us closer and faster than anyone ever has, to the brink of devastation. We need a new way of being, a new way to deal with commerce and the consuming of energy. A quick profit now means a long term cost and our grandchildren will curse us all for our lack of understanding or back bone in standing up and shouting for common sense and reason when we had the chance, just like many of us are doing the same to our previous generations short sightedness!

The only way we can change this is to use our hard won rights to vote at the next elections, not for the one who seems most charismatic, but one who is sincere and has common sense. Also to encourage our societies children to become politically and ecologically aware, by our own example, encourage within them a fire, a passion for change. We need to invest in our young people, see them as the future politicians and decision makers. In this way they will begin to see that they have a steak in the world, that rather than the apathy that exists toward voting in the youth of today, if we do this they will start to say “hang on a minute this involves us too and we can make a difference”.

In short we need to take the power back and remind the politicians that they are public servants, not petty tyrants with the power to do as they will. We must make them respect their employers…..which is by the way Us!