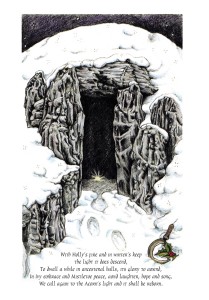 She waited patiently. The temple tomb built by her people so many years before was where she chose to await his return. The shortest day retreated allowing the land to slip back into the wide arms of night. In the sky tiny sparks flicked into vision. They gathered in ones and twos at first, gradually building in number in the deepening gloom; like an excited audience gathering for the event they danced and sparkled. In their lofty patterns she could read the ancient stories, the histories, legends and myths of all the lands that lay below them. Intermittently the twinkling sparks would be obscured by great white clouds harried and driven by an irritable Zephyr. She was impervious to the irascible wind that whipped at her corse, dark hair and set her green raiment rippling across her belly. Nothing could distract her from this night’s vigil, not this night. This night above all other nights, was theirs.

Far in the distance came the sound she had been waiting for, the faintest sound of chanting voices, thrown on the turbulent air. It had begun.

The clouds above took on a reddish hue, the fires had been lit. Soon her people would come, but only when they had sung and drummed and danced around the sacred fires. And then, after they had spoken the sacred words, laid the bones in the rebirthing cauldrons, and all ritual completed; after all that, he would seek her out, she would know his touch once more.

The orange glow on the clouds grew brighter, the smell of wood smoke and burning animal flesh filled the air. The animals had been sacrificed the day before, their calls and cries had been heard for miles around. They had not suffered unduly, their souls had been released with as much reverence and ritual as any human’s passing, allowing them to traverse the veil into the Summerlands as companions and guides. All would find their place in that new adventure, all would be ambassadors from this life into the next. They too would come to her.

The night deepened and as the stars tracked their celestial paths, the hypnotic rhythms of drum and chanting became more distinct. As the night wore on the shamans built the energy to frenetic crescendos, holding the energy until the dancers found themselves utterly at one with drums. Then the beat would fall to almost nothing, a whisper, teasing the feet to find the sound, only to rise again wilder and stronger than before. She could feel the whirling dancers beating their feet on the earth, hear their ecstatic calls and whoops as they cried to the spirits of the dead, the elements and all the forces of the world seen and unseen.

The stars span on in that endless night that seemed to be stretching its arms wider than ever before, the Hunter strode majestically along the horizon and the Plough cut its furrow across the blackness, she ached for the dawn. The drummers and dancers muscles ached, their throats were parched from smoke and dust and song, but they went on. They would all be glad of their mead when the morning came, but would never stop before the shaman’s drum. What if the dance was stopped for the simple wants of an aching body, if the songs were not sung because of a dry throat, if the sacrifices were not made, what then? What would become of them? Would his return? Would the dead be reborn? Aching bones or no, the dance would go on, anything else was unthinkable.

So the drum sang, they all sang and everyone danced for the Sun’s return, the wounded light of the heavens who’s time it was to die. He could do no more so they would aid his transition to a new cycle. He would be renewed and in his new life would come the rebirth of all that had passed through the veil and the quickening of the land. They sang to re-kindle the flame that would warm the seed in the belly of the Great Mother who waited in the temple. They danced for their beloved dead and for the healing of the land, they called to all of the powers of the seen and unseen worlds to aid them in this darkness.

Flames leapt and fire sprites danced spiralling up from the fires as more wood was thrown on and within the circle the dancers were joined by ghostly shadows. The dark shades grew from dust covered feet, every movement made by flesh and bone was echoed in exaggerated shadowy limbs that whirled and circled about the fires. The dark figures growing as tall as giants against the standing stones or shrinking to nothing against the floor, as all spun and leapt in the firelight.

It was at that moment the dancers knew the ancestors were with them.

Long years the temple to the Great Mother had stood beneath the stars. It had been built with love and dedication by all the tribes for her, a home for the dark times. She had been drawn to their magic and had listened to their prayers. In their way they understood her cycles and the need for his return. When the temple to her creative power had first been completed she had entered in and explored. It was then he had found her. Oh the joy of it!

She had taken on the human aspect if only for a short while, focusing all thought and feeling in one tiny space, at one moment in time, then he had come as heat rising inside her and struck at that sweet place. In that moment of union she had truly felt it all, their fleeting lives, their hopes, dreams and fears, so many fears. So profound, so passionate all over and done in the blink of an eternal eye.  And so she returned year after year to claim that one brief and blissful moment.

The wind had calmed by degrees so the clouds had slowed to an easy glide across the firmament. Finally it seemed that the darkness was beginning to lift. The light from the fires began to diminish as did the sound of the drums. No longer wild or frantic drum rhythms or whopping voices, they were barely audible now, just a low susurration on the gentle breeze. They would be coming soon and so would he.

The shamans had been watching the sky. At last the horizon had begun to change hue; the light was rising. They began to slow the rhythm, the dancers matching their pace, tired limbs, heads still whirling, yet dimly aware their part in the ritual was coming to a close. Slowly they began to make the last sacred gestures of the dance, honouring the sky above and the earth beneath them. Finally bowing low to their shadowy companions acknowledging their presence and blessings on the rite. The shades echoed back the acknowledgment but did not fade. All knew the ancestors would join the procession to the tomb, they always did.

A signal was given and the tribes to gather for the procession, the lines of tired people stretched far in the distance. All the tribes of the lands were there, arrayed with torches and banners. At the head of the line came the sacrificial bones, the bones of those who had died at the time of the summer solstice. Their deaths had been auspiciously timed for their tribes. Dying on the day of a solstice, particularly a summer solstice, was unusual. It marked them as an ambassador for the tribe, it would be their task to take messages to the Sun and the Great Mother at the next solstice. In their death throws they had been attended with much ritual and had painfully memorised the ritual pleas and bargains to be offered. After death their bones had been prepared and honoured throughout the ripening times within the solar rituals. They brought with them the full power of the Sun in their bones. Now, in this final ritual, their task would be to reside deep in the belly of the Mother and commune with the Gods, until the next ambassadors were chosen.

With flickering flame and dancing shadows the procession moved through the avenue toward the grass topped temple. The flames of the torches were burning low as the procession reached the dark mouth of the temple tomb. The great, green mound was silent, the bare trees, no longer tortured by the wind. The utter darkness of the entrance seemed to pull the eye, but repel the mind. The procession stopped, the shamans and bearers of the bones stood before the black opening. A low hum from the people and the crackling of dying torches was all the sound to be heard, the two lines fanned out on either side of the mound. The shamans turned to look at the horizon where a glow of pale light shimmered, they turned back to the entrance and signalled the bone bearers forward. Accompanied by a slow heart beat on the drum the bones were carried up through the passage. The dwindling torches lit up the ancient spirals and lines engraved on the walls. They seemed to dance and move across the walls, sharing their secrets to those who could read them. Within the chambers, with great reverence the bones and goods of the travellers were laid in the stone cauldrons. The drum fell silent, the prayers to the Great Mother were spoken and all torches, inside the chambers and out, were extinguished, only the two shaman would stay in the darkness.

Then and for the longest time, the whole landscape seemed to hold it’s breath.

She felt the seeds deep inside her, heard the heartbeat of her people. The stars left the sky one by one, it was not their place to witness this reunion. She could feel him rising, his warmth touched her skin, the slow caress of his fingers as his traced the curve of her body.

First to break the silence were the birds, the chorus began with a single song and grew to a cacophony with every kind of bird calling to wake the Sun. He responded, striking great fingers of light up through the clouds, washing the sky with pink and gold. The people drew in a loud breath of wonder as his golden crown broke the horizon in a shining blaze of glory. The fiery orb rose majestically sending shafts of gold across the land bathing it all in fire. The eastern sky radiated a kaleidoscopic vision of oranges, yellows, pinks and blues. The beauty of that dawn burned away all cold, pain, fear or sorrow. Even though the winter still held sway over the land, this moment was a promise of summers to come, of all the summers that had ever been. It was the promise of a new harvest, of plenty, if the magic had worked. They looked toward the entrance of the tomb and they all prayed that it had.

She lay beneath him and they were all fire and passion as the golden light pushed gently through her. With ardent, questing energy he found her secret, sacred places and filled them with his potent energy. She sang her joy with the voices of the birds. In that union all life was born.

The two shaman emerged from the tomb and signalled the successful completion of the rite. The Sun was reborn and the Green and Bountiful Mother would once again bear the fruit of their union. Now they declared, it was time for joyful celebration. Hope had been reborn for another year, time now to share food, drink and peace across the land.