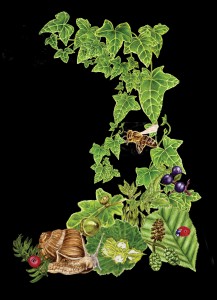 As promised, although a little late due to lots of fabulous adventures travelling, more of that later, here is another little seasonal story to tickle your senses from my keyboard, I hope you enjoy it.

The apple trees bowed their bejewelled crowns, nodding as the man walked through the orchard’s avenues. He drew a deep lungful of the earthy smelling air and knew without a shadow of a doubt that autumn was here. The apple harvest was nearly on them, there was so much work to be done at this time of year bringing in the fruit harvests, soon there would be a veritable hive of activity in this quiet place.

He found his favourite spot, put down his heavy burden and sat down under the ancient apple tree to contemplate the year that had flown by. He looked up at the mistletoe hanging in the branches and mused out loud to the tree about the ancient lore that bound the two symbols of peace and love together.

“Time was when no sword would be drawn under the branch of the mistletoe, no bad word spoken. Mind you the old ideas still linger some how in our bones, we do at least try to have peace and good will under the bowes at Yule these days. And how did the apple so beloved of the Gods become a symbol of evil? Ah yes the miss translation of a word, apple/fruit/evil, no wonder the ancient ones were wary of writing things down. Funny how even though it was a symbol of rebellion and marked as forbidden by God to Adam and Eve, we still grew it and ate it regardless!  Some things just go beyond the bounds of written lore and the truth of the apple is in the eating, so to speak.” he laughed at himself for such a weak word play.

The tree didn’t seem to mind the play of words and dropped an apple into his lap. “Thank you I will take that as a gift of the old ones” he smiled and bit with relish into the fruit.

The flesh was crisp, sharp and juicy and he revelled in the taste and textures that assaulted his tongue.  “Truly a gift of the Gods and one gift deserves another in return!” he exclaimed.

The sun was dropping lower in the sky and the shadows started to lengthen, the man finished his apple then turned to the large bundle he had placed on the ground beside the tree and began to unwrap it. He loosened the ties and pulled aside the thick covering, cooing gently to what lay inside.

The sun shone a beam of light through the lower branches of the trees and lit up the carving on the harp, a slight breeze plucked at the strings and they made a faye song in the air beneath the canopy.

The harper sighed and pulled the harp closer to him, ran his fingers lightly up and down the taught strings checking the sound, before he committed his fingers to finding the tune that lay hidden within the orchard.

The first strings were plucked with a searching, a questioning hesitation, looking to find the harmony of time and place. He hummed softly as he plucked at the strings of the harp, looking up into the tree canopy, following the branches reaching out to the sky above, reaching out with his heart and mind, he followed the roots deep into the soil.

He drifted with the breeze that sent the green and red jewels bobbing and swaying above his head and in the creaking of the bowes, he began to hear the song of the orchard. The resonance and the melody found the fingers and spoke to the soul of the man, he was transformed and transported across time and memory.

From ancient forests of central Asia, the trees had travelled and grown along side man, they had become a treasured and guarded prize, the food of immortality for many Gods, a symbol of love, magic and healing for all.

In the song of the orchard the tale of the apple was unfolded to the bard as he played and sang in the dwindling light of autumn. The smell of the forests, the heat of the sun and the march across continents, time and space, all the memories of the trees came to speak through that melody. He sang the tales of Idun and Aphrodite, the Golden Apples of the Hesperides, the Silver Branch of the Faye, the Isle of Avalon, all the tales of magic and mystery held within the healing fruit fell from the lips and strings of the enraptured bard.

And, when the song was sung, the last notes fading from air ladened with the rich, earthy autumnal atmosphere, it seemed that a collective sigh was released from every tree. The bard sat in silent revelry for a while letting the breeze play over the harp strings. He watched as the last of the suns rays pierced the branches intensifying the dancing shadows of the tree’s leaves on the grass all around him.

Then as if to confirm the end of the song and the end of summer, cascades of brown and yellow leaves leapt from the branches, like so many acrobats in a circus finally, tumbling in graceful, gliding motions toward the floor to be caught by the green arms of the dampening grass, their life energy spent, their dance was done.

The bard stood and bowed to the orchard, then he wrapped up the harp and heaved it onto his shoulders, then humming the melody he had been given, he walked slowly along the leaf speckled avenues back toward the farm house.