Creativity and perils of marketing, or, Darling that’s so cliche!

Home/damh the bard, druidry, jewellery, marketing, spirituality/Creativity and perils of marketing, or, Darling that’s so cliche!
Previous Next

Creativity and perils of marketing, or, Darling that’s so cliche! 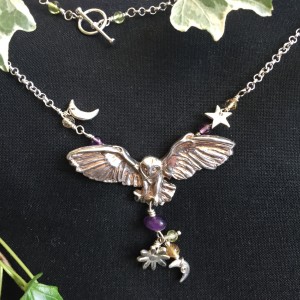 Here I go again worrying about the marketing aspects of getting my creativity out into the world. I have just spent two days uploading new earrings and charms onto my Etsy shop, do pop over and have a look if you like, most of that time I spent agonising over how to word the various descrpitions. I fight with my own cynicisim and the need to sound authentic when I tiptoe into the marketing world. How do I express ideas that I truly believe in, without sounding cliched, dated or like a new age space cadet?

My morbid loathing of sounding old hat, fluffy or just plain bonkers is a bit of a handicap it has to be said, but I really do believe in the power of symbolism, crystal energies, animal magic and so on, that’s what my pieces illiustrate for me and hopefully for others too. It has to be said that I also have a morbid fear of not selling anything, especially having invested a lot of energy, time and love in aquiring, developing, then putting new skills into practise, not to mention the outrageous expense of all those fabulous tools. Then there is this dangerous addiction I have developed to sourcing gorgeous materials like silver, luscious beads, crystals and so on and so on.

So how do I put those, let’s say ‘out of the ordinary’ ideas, out to sail on the larger commercial oceans and not have my products sink unseen into the murky depths, mostly because of unskilled marketing patois and a rigid belief that the marketing realm is populated by soulless creatures bent on feeding the populous cheesy cliches, misinformation and fantasy lifestyles, in order to mercilessly part them from their hard earned cash? Am I sounding a bit over the top? Quite probably, but this is the way my head works most of the time and the reason my long suffering partner despairs of me ever earning a living from my art, and also it is the particular reason it took me two days to up load my stuff to a commercial site.  But hey it’s done now, I hope the descriptions  read as they are meant and that the commercial seas of infinate potential are kind to my little darlings.