First world problems or It’s dark moon, My iphone died, but I have a new Etsy shop!

First world problems or It’s dark moon, My iphone died, but I have a new Etsy shop! 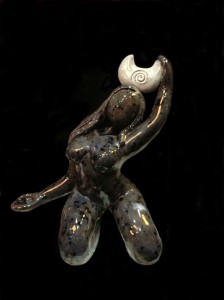 Dark moon energy! It always has some annoying affect on my life, whether that be seriously grumpy moods, electronics failing at every turn or other minor catastrophies of a “first world” nature. So I generally l keep my head down until the phase has passed, then let out a sigh of relief as the thin crest of a new moon eventually emerges from the darkness once more.

The past few days of this descent into the dark moon period has been no exception to the rule. Firstly my iPhone died by degrees. It was an operatic passing peppered with dramatic attempts to struggle on and sing one more aria before finally expiring. It now bears a closer resemblance to Monty Pythons ‘Dead Parrot’, beautiful plumage, but stone dead! Bereft of life it rests in peace, it has shuffled off this mortal coil and joined the choir invisible. I toyed for a brief moment with the idea of nailing it to a perch inside a bird cage and entering it into the Turner Prize for next year with the title ‘Beautiful Plumage’. I would have expounded on the idea that it represented a forlorn comment on attitudes to important issues like life and death in our modern world, but thought it might not be quite pretentious enough.

In addition to the sad demise of my best beloved iPhone, I encountered a myriad of other irritating problems, all of which were of a ‘first world nature’. Such as the process of setting up a new website and accompanying shop, which turned into making an Etsy shop. In that process all of the photos somehow turned 90 degrees in the act of uploading them to the website. And all this because the woocommerce insite webshop failed to be either use or ornament.

It should be needless to say that during the days of electronic rebelion there was much arguing, ranting and enthusiastic verbal communication with the various computer programs, none of which acheived anything productive, in spite of how commited an animist I might be, (I refer you back to the Dead Parrot scetch for the futility of complaining). It was only when the dog, who had been subject to negative vibes in the house for some time now, finally gave out a long and heavy sigh and a sad look of reproof from his place of comfort on the sofa, that the futility of that enthusiasticly verbal, yet ultimately deadended path, really hit home and the phrase “have a word with yourself love” popped into my mind. So I dug deep and found a little perspective, which in all good truth, wasn’t that hard to do.

With the reemergence of the moon’s light the energy lifts and life returns to some kind of equilibrium. The new phone has been delivered two days earlier than expected, the Etsy shop is going down well, I even have an order, to cap it all I’m even starting to think about putting up the Solstice decorations and getting into the festive mood, will the wonders never cease?